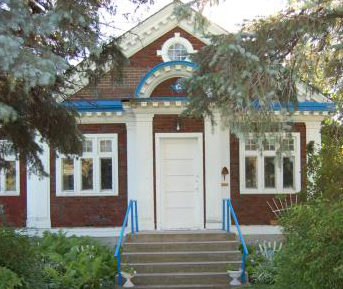 In the early 1870's two American businessmen were tipped off by their friend James J. Hill, the great railroad entrepreneur, about an area in Manitoba which possessed an extraordinary potential for developing into the principal economic center for the region. With eager optimism, Thomas Carney and William Fairbanks led a colonization party in the spring of 1874 to settle the prairie on the east side of the Red River at the Canada-U.S. border.
The fledgling community lived in the hope that their village would become the thriving junction for not only the north to south railway line, but the intended east to west cross Canada route, the arterial channel to the new Canadian West. Expressing high aspirations for the settlement, Fairbanks named the town after a philosophical champion of man's individual nature, the American poet Ralph Waldo Emerson.
In mid-July, 1875, a Red River steamer, either the S.S. International or the Dakota, docked at Fort Dufferin on the west bank of the Red River just north of Emerson/West Lynne. Hundreds of men, women and children arrived from South Russia to settle in Manitoba's Pembina Reserve (later called West Reserve).
From 1880 to 1882 Emerson was booming. In 1880 Emerson had an annual assessment of $476,000; by 1882 this figure had risen to over a million dollars.
Disaster struck in 1882, when Emerson, at the peak of its prosperity, experienced its first flood. Three feet six inches covered the town. The following year, 1883, brought another flood with a depth of two feet ten inches. This wasn't the last flood Emerson was to experience. Emerson flooded again in 1893, 1897, 1916, and 1950. The most recent flood, 1997, Emerson was surrounded by water but managed to keep dry, thanks to the community ring dike, which surrounds the town. The year of 1999 brought the March West. The trek began May 8th, 1999 at Fort Dufferin in Emerson, Manitoba and continued west, ending in Edmonton, Alberta July 24th, 1999.
The March West closely followed the route traveled by the North West Mounted Police in 1874 by the first Canadian police force. Today Emerson is a charming, friendly town with an average population of about 700. Emerson Port of Entry is a major border crossing, accommodating nearly a million travelers per year. The twinning of Highway #75 has greatly enhanced travel for visitors from the U.S.A. as well as Canadians going south.
Todays fire rating is Low