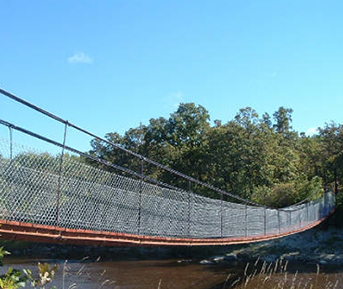 The Swinging Cable Bridge, a vernacular version of a light-cabled bridge, is one of only four known pedestrian suspension bridges in Manitoba and the only one protected as a heritage site. The structure was a pragmatic response by residents in the isolated Senkiw area to the need for a reliable crossing over the Roseau River to enable their children to attend the local school.
Rebuilt during the 1950s using salvaged farm implement parts, the bridge also is noted for its inventive support mechanisms, which stabilize the cables, the main structural components. The narrow crossing, known locally as the 'swinging bridge' because of its motion under live loads, provided year-round use until the school closed and now plays a pivotal role as a recently reconstructed link in a section of the Trans Canada Trail extending between Emerson and St. Norbert, a south-Winnipeg suburb.
Todays fire rating is Low